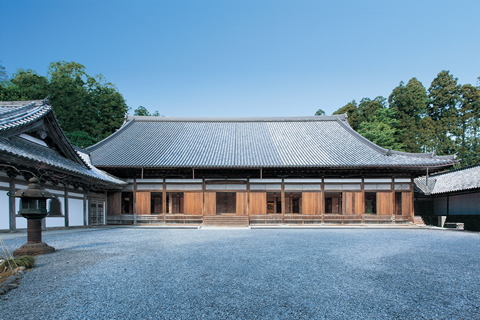 This temple was originally opened in 828 AD by Ennin (posthumously known as Jikaku Daishi), priest of the Tendai school of Buddhism. It was considered to be one of the greatest Zen temples in all of Oshu Province. During that time, it was often referred to as Enpuku-ji, which was inspired by Enryaku-ji, head temple of the Tendai sect of Buddhism. At the turn of the Shogen era (1259), the temple was transferred to the Rinzai school of Buddhism and its name was officially changed to Enpuku-ji.

The present buildings were completed by feudal lord Date Masamune in 1609. During this five year-process, the old construction was renovated to conform to Momoyama-style architecture. In order to complete this task, craftsmen were gathered from many different countries, and construction materials were brought from the depths of the Kumano Mountains. Lord Date even participated in the rope stretching work, showing his enthusiasm as the overlord of Oshu Province.

The Main Building reopened to the public after extensive restoration in April 2016.

As is fitting for the Date family temple,Zuiganji is a majestic building that truly displays the essence of the Momoyama era. The hinged doors and ranma (transoms) along with the extravagant paintings on the the fusuma doors and toko-no-ma alcoves are said to be the culmination of the representation of natural beauty through man-made beauty. 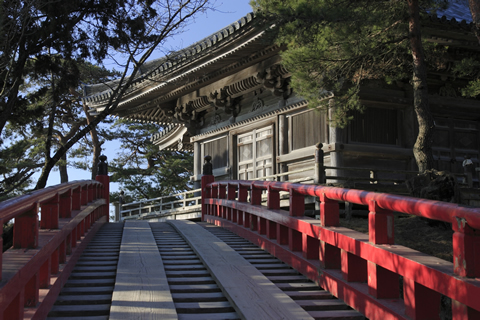 Godaido is a Buddhist worship hall Godaimyo(Five Dava Kings) had been enshrined in that has come to symbolize Matsushima. In the year 807 AD, the shogun Sakanoue no Tamuramaro built a small Buddhist temple called Bishamon-do during his expedition to the east. In 828, Ennin (posthumously called Jikaku Daishi) not only founded Enpuku-ji (modern-day Zuigan-ji), but also placed images of the Five Dava Kings within Bishamon-do, which led to it being known as Godai-do. Fudo, the immovable, is placed in the center; Gozanze, the one who subjugates the three worlds, is located to the east; Daiitoku, deity of victory, is placed to the west; Gundari, enemy of devils, is positioned to the south; and Kongo Yasha, destroyer of foolish human desires, is located to the north.

The current structure was constructed in accordance with Momoyama-style architecture by Date Masamune in the year 1604. On the curved wooden supports of the four walls, carvings of the 12 signs of the Chinese zodiac are arranged facing their corresponding direction.

Leading to the temple are unusual red bridges with spaces between the planks- if you trip you are not yet ready to reach the temple! 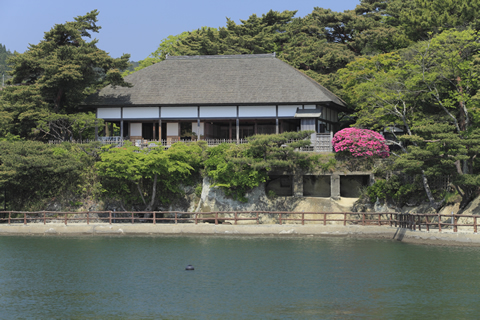 The Japanese word "kanran" means "to watch the ripples of the sea." It is said that Kanrantei was originally a teahouse in Hideyoshi Toyotomi's Fushimi-Momoyama Castle. The teahouse was then inherited by Date Masamune, who moved it to and rebuilt it at his mansion in Edo. His son Tadamune, the succeeding feudal lord, ordered it moved to its present location next to the ocean, but emphasized that not one pillar nor stone be altered in the process. According to record, special envoys of the Shogunate, feudal lords, princesses, and nobles' concubines were often received there and used the facility as temporary lodgings.

Until the end of the Edo period, there were over 11 buildings standing on the grounds, including the rooms of Samurai attending their respective feudal lords, kitchens, stables, etc. The Kanrantei is a precious portion of these original grounds that still remains today. Composed of two southeast-facing rooms taking up nearly 60 square meters and surrounded by an outcropping edge, this building is one of the Miyagi Prefecture's Tangible Cultural Properties. Its yosemune-style roof with four slanted planes lends the building a simple and clean-cut feel. The pictures hung and drawn directly onto the toko-no-ma alcove's walls gleam with magnificently vibrant color. Original works of the great Sendai-han artist Sakuma Shuri, they are designated as an Important Cultural Property of Japan. At first hailed as a pavilion for feudal lords to gaze upon the moon during cool evenings, the building originally was named "the Moon-Watching Palace." The name "Kanrantei" was given by Date Yoshimura, the fifth generation feudal lord who inherited the structure. 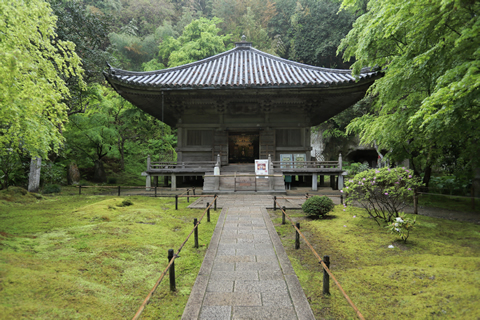 Entsuin Temple is located to the west side of Zuiganji Temple, and is the mausoleum of Date Mitsumune. Mitsumune was the second son of Date Tadamune, the second feudal lord of the Date clan of Sendai. He was accomplished in both the literary and military arts, but died at the young age of nineteen in September of 1645 in Edo. Lord Tadamune opened Entsuin that year to mourn Mitsumune's death, and Sankeiden (Mitsumune's mausoleum) was completed in 1647.

Sankeiden was greatly influenced by the Western culture that Hasekura Tsunenaga brought back with him from Europe. Inside the right-hand door of the zushi (miniature shrine) is a painting of a Western-style rose that is said to be the oldest in Japan. The rose is depicted upon gold foil using the three colors of white, red, and green. The long-lasting materials of verdigris (copper rust) and coral ensure that the shrine's colors will never fade. 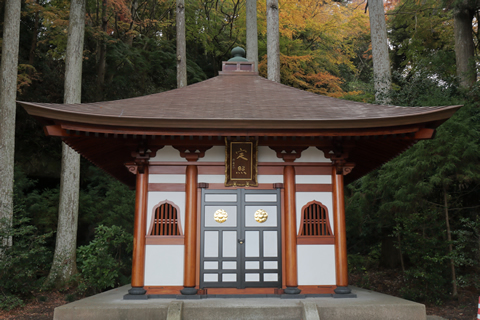 This Temple is the family temple of Lady Iroha, who was the daughter of Date Masamune and his legal wife Lady Megohime. Along with Yotokuin and Entsuin, it is counted as one of Matsushima's three most famous mausoleums. Today it is also known for its many cats that wander the grounds.

Yotokuin is the mausoleum of Lady Megohime, Date Masamune's legal wife, who died in 1653 at age 86. Date Tadamune, the second lord of the Sendai clan, opened it for his mother while she was still alive in 1650 as a place to practice shugyo, or aesthetic training and study. The Yotokuin (Lady Megohime's) mausoleum was constructed in 1660, and is an Important Cultural Property. It is not normally open to the public. 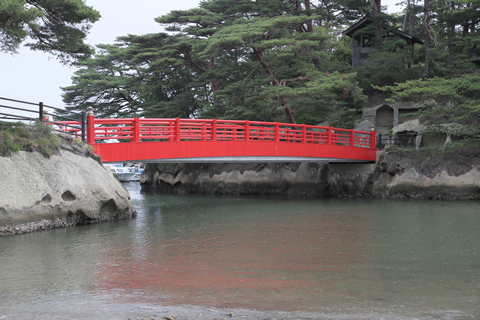 Oshima Island, which is connected to the mainland by a vermillion-lacquered bridge, is said to have been the home of 108 caves. Currently only about 50 of them remain, but visitors can still taste the spiritual atmosphere of the caves by viewing the itabi (stone tablets) used to pray that the souls of the dead are able to enter the Pure Land (Buddhist Heaven). Small pagodas called gorinto are also located inside the caves, along with the numerous posthumous Buddhist names of monks that are carved into the cave walls. Memorial services were also held in Matsushima, which used to be known as "Koya of Oshu Province" after Mt. Koya, one of Japan's most sacred sites.

On the tip of the island closest to the yacht harbor,you will find a cliff dotted with caverns on three sides and a small patch of level ground. These are the remains, which are dimly-lit even today, of the temple referred to as the "inner sanctuary" where legendary Buddhist priest Kenbutsu Shonin recited 6,000 fascicles of the Lotus Sutra over the course of twelve long years of aesthetic practice.

The Monument of Raiken（Important Cultural Property） 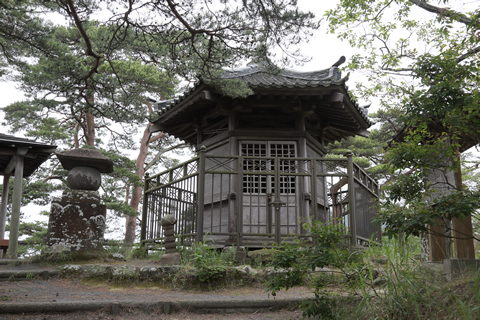 This stone monument, located on the southern tip of Oshima, is dedicated to a Buddhist priest who spent 22 years undergoing ascetic training on the island and depicts how the island appeared at the time. It is protected from the elements by a hexagon-shaped structure called a sayadou. 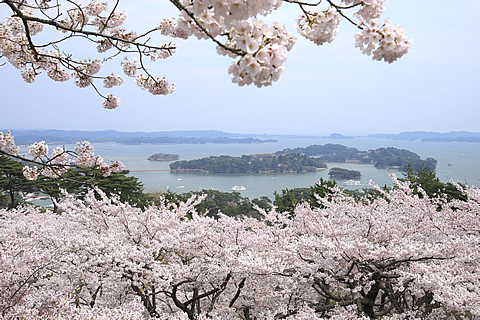 During a pilgrimage, the famous poet Saigyo came across a young boy under a large pine tree. The two exchanged Buddhist riddles, and Saigyo ended up losing. Giving up on his journey to Matsushima, he left for elsewhere.

Over 260 cherry trees are contained within the landscape of this well-known park. From the viewing platform, the scenery of Matsushima and the blossoms of the cherry trees form a single, elegant portrait. No other cherry blossom viewing experience even comes close.

In October 2015 a new café and event space, Panorama House, with excellent views of the bay, opened in this park. 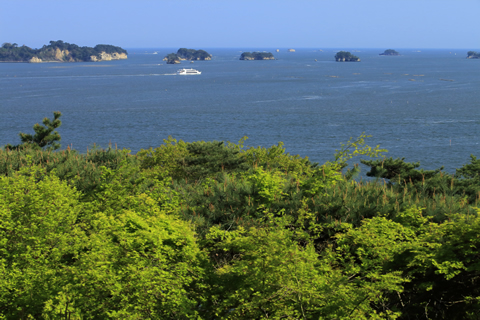 A peak located on the cape jutting out of the southern coast of Matsushima. Because you can see both Shiogama Bay and Matsushima Bay from the viewing platform, This hill is named "Sokan" ("views of both"). Watching the sun as it rises over the far side of Oshika Peninsula and Kinkasan Island is an absolutely sublime and overwhelming experience. 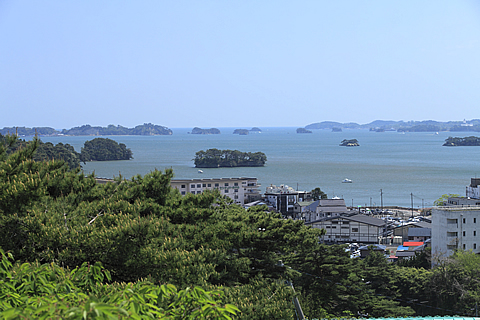 As you stand upon the Shintomiyama's viewing platforms, located on the northern side of Zuiganji Temple, the entirety of the inner bay of Matsushima spreads out before your eyes. From the other platform, located on the summit of the hill, Fukuurujima Island is at the forefront of your vision, and Matsushima (along with its residential areas) spans out before you. You can also find a poem by English poet Edmund Charles Blunden inscribed on a hill here. 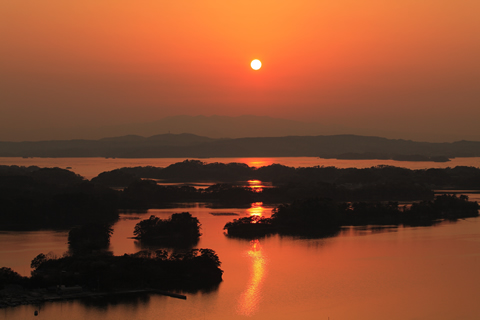 This lofty peak is located near the center of Miyatojima, a connected island located on the eastern side of Matsushima Bay in Higashi-Matsushima city. Offering the ability to see Matsushima spread out below you like a miniature garden, this vantage point is known as "the Gorgeous View." 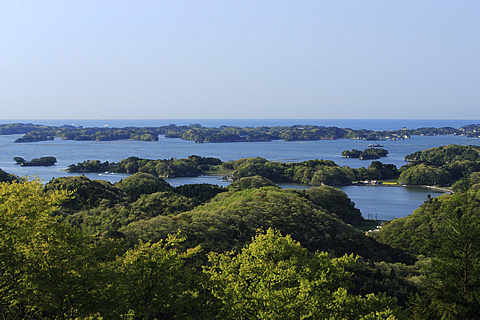 Within Daigyoji, a Buddhist temple located on the summit of this mountain, lies one of Oshu Province's three images of Kannon. Within the midst of this tranquil atmosphere, you are able to see the various islands of Matsushima Bay neatly lined up before you. It is for this reason that this vantage point has been named "the View of Harmonious Beauty." 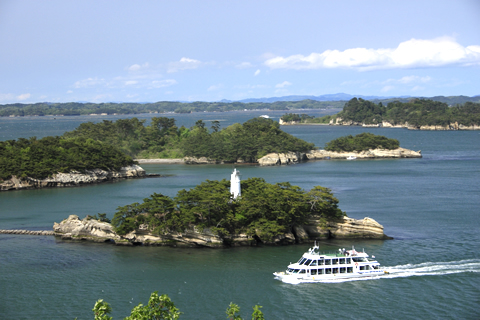 From the cliffs of Yogasaki, the northern edge of Shichigahama Town, you can see the waves of the Pacific Ocean come crashing onto the rocks below, and then retreat back to the sea. This panorama is known as "the Dynamic View." 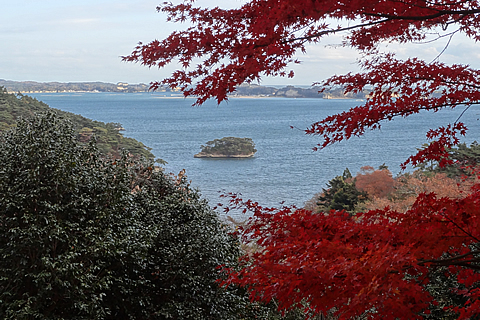 A small mountain loated to the rear of Mount Sokan. From the peak, it looks as though the inlet leading to Matsushima Bay expands before you like a folding fan. A removed and serene vantage point where the entirety of Matsushima is visible, this viewing point has been dubbed the "Mysterious View." Also atop the mountain lie the remnants of a feudal lord's teahouse. Visitors during the autumn can also enjoy displays of beautiful crimson maple leaves.

Copyright © Matsushima Tourism Association All Rights Reserved.
No reproduction or republication of articles, pictures, etc. used in this site without written permission.